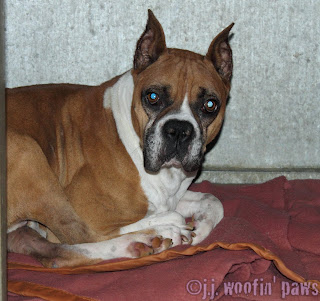 I get dozens of posts every day about boxers in danger. I generally scroll through them saddened by the fact that they are so far away (various places in the US) and that our resources are so limited, both financially and because of a lack of foster homes.

But this time I kept going back to one photo. Casey seemed to call out to me, telling me, "you're the one who can help me". After stewing about it for a day or so, I finally posted that we would take him if transportation could be arranged from southern California to Vancouver, BC.

I didn't hear anything back and breathed a sigh of relief that a local rescue had been found for Casey.

Then on Aug 8th or 9th, I saw a plea reposted for someone to step up for Casey. I immediately posted that we would take him and on Saturday, Aug 13 Casey flew up to Vancouver. He was fostered overnight in Vancouver and Sunday saw Casey on the road to Alberta to a longer term foster home.

The reason Casey languished in the shelter from July 5 to August 12 was he was a "medical" dog. That usually means "expensive". It is likely that Casey was hit by a car. Xrays taken on August 16 show that Casey's femur is not where it's suppose to be. He will need surgery, a Femoral Head Ostectomy (FHO).

Casey's surgery will run about $1,200.00 if there are no complications. The cost isn't exorbitant by any means, but it stretches our small budget to the breaking point.

If you are able to help with a donation to Casey, please email me - boxers@wispernet.ca 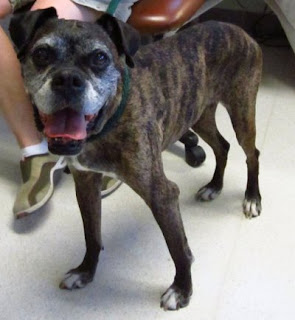 Casey isn't our only new Canadian.

I confess, another beautiful boxer face captured my heart. Faith arrived in Vancouver from northern California on August 6. As with Casey, she was to be fostered for a short time in Vancouver, then make her way to Alberta. Faith had other ideas though. Within hours of her arrival, her foster family was so in love with her they couldn't let her go.

When the heartache and frustration of rescue begins to take a toll on me and I tell myself I can't do this anymore, I will remember Casey and Faith. They and all the other dogs we have helped over the past 16 years are the reason I can keep going.

Labels: From the Other Side 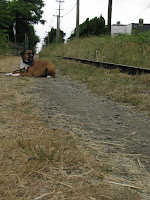 Freckle and I walked over to pick up my car today from the mechanic and while there, bumped into the owner of the transmission shop just down the street. Some years ago, he replaced the transmission on my car and met our rescue girl Sassy. He was all over Freckle and told me he and his family had adopted a boxer, perhaps four years ago, from Boxer Rescue Canada. He loves this dog - his first boxer, I think. It has natural ears and a natural tail - and unfortunately, I didn't ask its name or even whether it's male or female. He said they've been thinking about getting another, so I'll be going by the transmission shop later in the summer to see if they did.

That's a photo of Freckle from the walk this morning, on the disused train tracks that run behind the transmission shop and the mechanic's garage - it goes for miles and miles and is a bit like a country path in the middle of Vancouver.
Posted by Mary-Doug Wright at 9:34 PM 2 comments:

You can now get your dog tested for the gene mutation that causes boxer cardiomyopathy, Arrhythmogenic Right Ventricular Cardiomyopathy (ARVC). I blogged about this early this morning, saying that the test would be available later this year - well, it's now available through the College of Veterinary Medicine at Washington State University. You can send in a blood sample or a cheek swab. Details are available on the Colleges website here. I'm cross-posting this information to spread the word as widely as possible.
Posted by Mary-Doug Wright at 8:51 PM No comments: 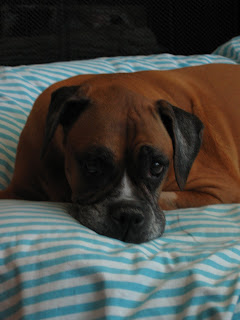 A Twitter tweet yesterday by @sarchet62 (Pills for your pets OMG http://is.gd/HuJH) inspired me to finish a blog post I started two years ago describing our experience with Sassy, our rescue boxer, and her severe separation anxiety. My non-professional writing efforts often bog down, ending up in my drafts file never to be revisited. I dusted this one off today, updated it to reflect time passed and a some references, and have posted it to my blog [link]. Sassy died in 2006 – I miss her to this day – so writing about her keeps her alive in my memory.

The blog post is long – too long for this space – so head over to my blog, meldinme, to read it. It describes our experience and the help we received from the boxer world. I've included some additional references at the end if you want to read more.
Posted by Mary-Doug Wright at 6:53 PM No comments:

Boxers and the heat of summer 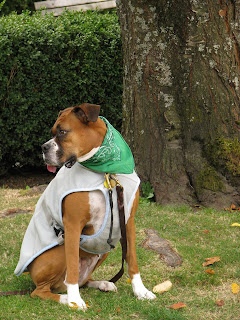 Every year at this time, I worry that there's something wrong with our boxer. It's happened with all three - their breathing becomes laboured, their tongue is hanging out more, and they're just plain sluggish. Toys aren't all that interesting, even treats are sometimes turned down. Now that we're on boxer number three, before panicking, I sit back and remember that this has been going on since 1993 and that it's just the change to warmer weather that our boxers are having problems with. It's the time of year when the mid-day walks have to be reconsidered in favour of early morning and late evening. We train outdoors in group classes on Saturday mornings and it can get pretty hot on the field. Last summer, we bought a "swamp cooler" vest to help Freckle (aka Lexi) deal with the heat. I'm going to have to dig it out and have her wear it soon, along with a wet bandana. For information about dogs and heat, check out Summer Health Tips for Dogs from the University of Minnesota - it includes information about assessing and preventing heat stroke.
Posted by Mary-Doug Wright at 11:09 PM 1 comment: 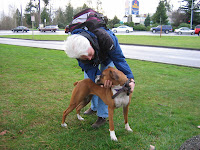 How do you know they’ve settled in? 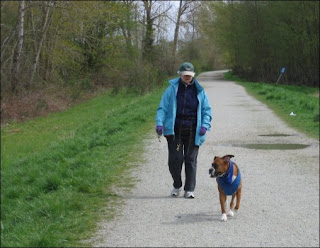 One of the things that people with rescue dogs ponder is just how do they know their new adoptee has settled in and feels they’re there to stay. This is something I’ve found myself wondering about in the last few months with Freckle-Lexi. We adopted her from North Idaho Boxer Rescue on December 9th (see Freckle-Lexi and Ceilidh’s blog for her story and about meeting her for the first time).

Freckle-Lexi has been a quiet girl since we adopted her. She doesn’t bark when someone knocks at the door or rings the doorbell. She rolls out the red carpet for anyone we let through the door. I’ve been thinking that maybe she won’t make a very good protector like both Bridget and Sassy were. You know the kind of dog I mean – the one who wags her tail when the thief arrives, welcoming the company and holding the sack while your belongings are being tossed into it.

But, just in the last week, Ive had a glimmer of the protector Freckle-Lexi will be. Yesterday, I heard a quiet, though “business-like,” growl coming from the living room while I was in the back, working. I went to see what was going on, and saw two people standing just outside our hedge, close to the entryway to our door, having a neighbourly conversation. Once I said it was fine, no danger, Freckle-Lexi stopped the growling.

And just today, Freckle-Lexi was in the back patio while I worked just inside with her in view, and she let out a very loud and deep bark at something she heard on the condo complex property. I figures she was either alerting me about a possible intruder, or warning someone not to come any closer.

Posted by Mary-Doug Wright at 8:31 PM No comments: